Slipper clutch and its adjustment

There is much talk about slipper clutches of late thanks to the ZX6RR and the new ZX10R and yet the design of the slipper clutches on these two bikes is an evolution of that used on the ZXR750/ZX7R models and still is very similar. The reason even most ZXR/ZX7R owners don’t know about it is that Kawasaki used to call it a “back Torque Limiter” and set it at the factory with so little slip that you hardly knew it was there.
However in their racekit manuals they made it plain that you could tune it to adjust it to your riding style…

First of all let’s explain why we may want to play with the Slipper Clutch.

Without a Slipper clutch (or with the slipper clutch virtually disabled) if you downchange too aggressively and carry too much speed for that gear you could end up locking the rear wheel. The Slipper Clutch helps by allowing the clutch to partially slip until the engine speed matches your own speed.
On the track this can mean that in certain corners you can afford to downchange earlier to set yourself up for the best line without ending up being slowed down by engine braking.

Here’s the extract from the Kawasaki Racekit Manual explaining how to tune the Slipper Clutch. 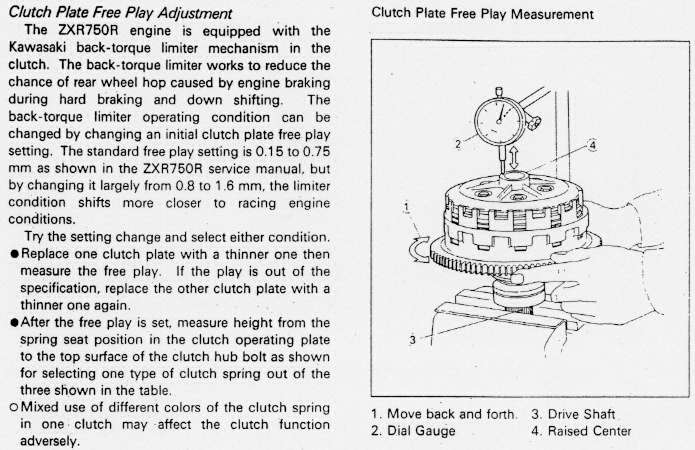 Most of us don’t have a spare output shaft, but you can still try this out by swapping some of your thicker plates for thinner ones and see what difference it makes. The thinner plates are available from Kawasaki dealers. As you reduce the height of the stack you will need to either use stronger clutch springs (see racekit extract below) or use spacers as explained by Siggi in his technical article further down this page. You can still get the racekit springs from Kawasaki dealers too. 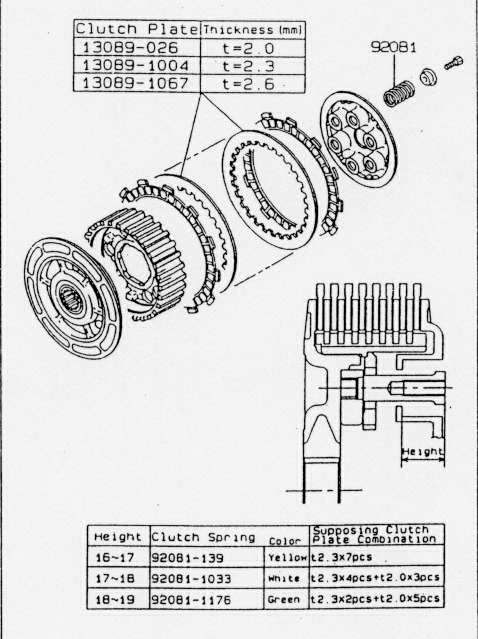 If you want to delve deeper in how the Slipper Clutch works, here’s a technical write up from Sigvart.

I was out this morning taking apart my clutch assembly to see how it worked.

The primary spring pressure we’re dealing with when it comes to the torque-limiter, is the limiter springs (the two star shaped leaf springs – only one spring on pre ’94 bikes). This is the spring pressure that keeps the Sub-Clutch-Hub (SCH from now on) in place when you slow down in-gear for a stop sign, because it’s the SCH that will transfer pressure onto the pressure plate and make it release the clutch.

Under normal conditions the SCH is engaged to the Clutch Hub by three damper cams, which locks them tight together when the engine is pulling the back wheel.
At this point the SCH is clearing the pressure plate by ca 2.6mm, and is not affecting normal clutch operation.
This distance, 2.6mm, is what we actually are reducing or increasing, and is a measure on how far the SCH have to extend to get to the pressure plate. And once there, it`ll overcome the six-spring pressure and release the clutch.

Under moderate engine braking where the revs aren’t that high, the back wheel will transfer its higher speed to the clutch hub and make it go faster.
When the clutch hub is going faster, each damper cam will work against its ramp and will make the SCH work itself away from the clutch hub, and closer to the pressure plate.
But the limiter springs will stop it before it reaches the pressure plate, because the speed difference between the wheel and the engine isn`t high enough.

Under high load engine brakings; where you storm over the race track straight, pulls the clutch at 12.000 rpms, shuts the throttle, hammer down one gear….and dumps the clutch whithout giving any throttle…. then you`ll activate the torque-limiter, if it`s proper calibrated that is.
Once again the back wheel will transfer its speed trough the gear clusters and into the clutch hub, which will force the SCH away and against the pressure plate.
This time the force is so great that it`ll overcome the pressure from the limiter-springs and the six-springs, and release the clutch!
This will prevent the engine from locking up the back wheel, which would make it skip and slide. It will instead partially de-couple the wheel from the engine, and let it run at it`s own pace.

I don`t think the six-spring pressure has anything to do in the limiter operation.
When the SCH is forced away from the Clutch Hub, it`s limited how far it can go before it`s mechanically stopped by solid materials in the clutch hub.
If we take my numbers from when the engine was new to me, six steel plates by 2.3mm would give me a me play of 0.35mm, which is 0.35mm from totally disabled torque limiter.
So if I installed five 2.3mm plates and one 2.6, then I wouldn’t have any limiter effect….Because the pressure plate is spaced SO far from the SCH, by the thick stacks, that it can`t extend enough to even reach the pressure plate.

Using my current numbers I`m calculating that the SCH is reaching the pressure plate, and then some…actually 1.05mm passed the reaching point, which will release the clutch in a moderate way. (A good friend of mine just mailed me today after trying my figures, 5×2.3mm + 2×2.0 with 0.6mm spacers under the six-springs. And he Could feel the difference! In his own words: “Well I did the clutch mod and it did make a difference. Not a free wheeling difference but it doesn’t hit as hard now, very very nice. Thanks for the info and help.”)

I`m all for trying out the limits of the torque-limiter settings, as I have a high-compression, big-cubed engine on a narrow and twisty track, and I need all the help I can get into corners. So I`m gonna reduce the stacks one by one, and note the difference as I go.

As to why I think it`s important to shim the six-springs:
The service manual states that the service-limit-lenght of the clutch springs should be no less than 2mm shorter of the standard length….
Say you have springs who are just 1mm longer than the service limit, and that`s all fine, until you reduce your stack height (and spring pre-load) by 1.5mm.
Then you are 0.5mm under the service limit of the spring pre-load, and that can`t be good for a stock engine, let alone a tuned one.
That is why, I think, the race manual tells you to use different springs when you reduce the spring-preload, so as to keep up the normal spring load, and normal clutch operation.
Which is why I`m shimming up as I`m reducing down stack height, as I don`t have the kit springs, and my friend (and myself) knows that it works with shims.

Broadly speaking you can configure three different degrees of slip in the clutch:

Me and my friend are close to the medium one. Before I made this change I had problems with my rear wheel skidding and drifting out under heavy braking, but that is all gone now. And another thing that tells me this works, and that it can`t be a product of feel and psychology, I can actually hear the back-torque limiter working….
I can hear the engine being revved by the force of the faster spinning rear wheel, then I can hear drop in rev as the clutch is slipping. And if the mismatch between speed and revs are big enough, then it`ll repeat this operation several times under one braking operation.

You will wear them out a little faster with a more active back-torque limiter, but nothing serious I think:-)
Time will tell.